The original Nokia 3310 is a world famous phone – probably the most famous handset that’s ever been released.  First announced way back in September 2000 and launched the following year, the 3310 rapidly became widely acclaimed; not least so for its durability.  Almost 20 years later and there are still 3310’s in use and earning itself cult status.  126 million Nokia 3310’s were produced until the handset was phased out in 2005.

And this year – the Nokia 3310 is back!   A revamped, updated handset with all the familiarity and nostalgia of the original phone is due to be released shortly.  The new 3310 is going to be sold under license by HMD Global who has also developed a range of Nokia branded, Android powered smart phones.

The re-release of the Nokia 3310 has been cited as an exemplary marketing ploy to re-launch a failed brand.  "The 3310 was the first mass-market mobile and there's a massive amount of nostalgia and affection for it," Ben Wood from the technology consultancy CCS Insight was quoted as saying.  He went on to mention that if HMD had just announced three Android devices they would have barely have gotten a mention.  By re-launching a brand off the back of the most iconic handset in history – Nokia stands a chance of making its way back in. 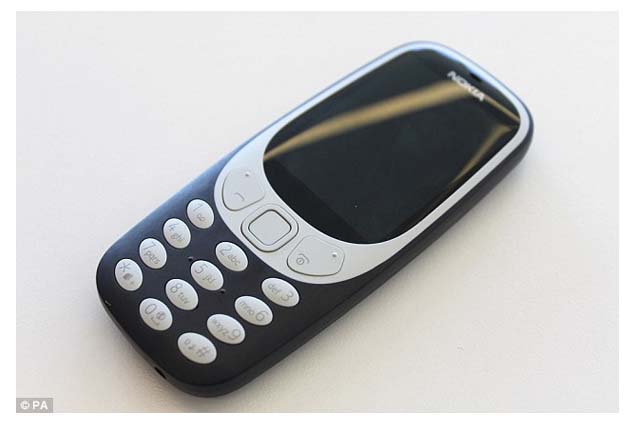 Fans of the classic will be happy to know the phone is pretty much unchanged in its capabilities – meaning that this isn’t a smartphone disguised as something simpler but rather a “feature phone” that provides limited internet capabilities.

The phone utilises 2.5G connectivity, making its data speeds significantly slower than today’s 3G and 4G devices and runs the S30+ operating system.  Web browsing is possible and the phone has a small range of app’s available – but the Nokia 3310 isn’t designed to replace your smartphone and so shouldn’t pose a primary concern to any new owners.  The new 3310 also features a 2 megapixel camera.

But the Nokia 3310’s biggest advantage over its smart phone rivals is its battery life!  Up to a month on standby and over 22 hours talk time from a single charge.  This puts the 3310 as the perfect backup or emergency phone – and a moniker it’s most definitely aiming for.

But the most important feature of all – YES! The new Nokia 3310 does have Snake!

The handset will cost around £41.51 at launch in the UK which is tremendously good value even at this basic level.  "It's almost like a digital detox or a holiday phone," HMD's chief executive Arto Nummela told the BBC, also saying the phone could be sold like an accessory to your main phone. "Why wouldn't you buy this like candy? If you see this hanging on the shelf at the checkout in a [see-through] package, then you'd just buy it as an accessory."

It has been noted that HMD would not be able to survive on the launch of the Nokia 3310 alone.  And the company has announced plans for its premium Nokia 6 smart phone to be launched worldwide following its success in China.

With as much hype and excitement that the new 3310 is bringing to the company – it could also be a dangerous time.  If the phone-buying public ends up seeing Nokia as a gimmicky retro brand rather than a serious smartphone maker for the 4 and 5G future, then HMD may come to regret its 3310 relaunch!