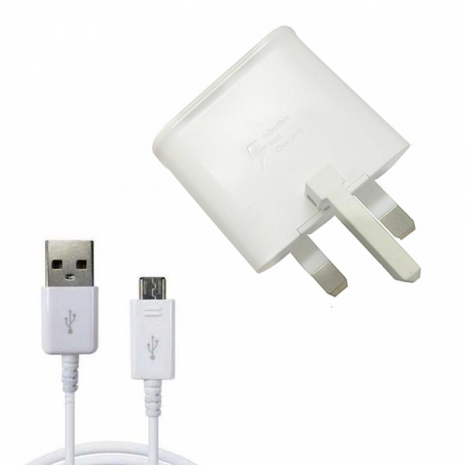 Please Note: The cable included in this bundle is not compatible with the majority of Samsung smart phones manufactured in 2017 or later. If you are unsure as to whether you need a "Micro USB" or "USB C" cable please contact us. Click here for the USB-C bundle.

Thanks to Samsung’s new Fast Charge technology, your phones battery can go from zero to up to half full in around half an hour.   So now you’ll spend less time connected to a charger and more time connecting with the world around.

The Samsung Wall Charger is bundled with a removable Samsung USB to Micro USB cable, which gives you the ability to charge your phone any USB equipped device such as a laptop or PC if you aren’t near a wall socket.

The cable can also be used to sync and transfer files between your Galaxy smartphone (or any other smart phone that’s Micro USB equipped). Keep one at home and one in your bag to make sure that your phone is always ready to go when you are.

Average Star Rating:
4.97 (35 reviews total)
Have you used the product?
Tell us something about it and help others make the right decision
Write a review
Show reviews with:
5 star (34 reviews)
4 star (1 reviews)
3 star (0 reviews)
2 star (0 reviews)
1 star (0 reviews)
Show all reviews
G8llian Huish
I ordered the wrong cable from Digitalsave, and they immediately exchanged it for me with no extra charge. Brilliant customer relations and delivery time was excellent. They answered my email immediately, most unusual these days. Used them again immediately for a SD card, this arrived the next day . Fantastic company to deal with. Will definitely use them again in the future and will recommend them to family and friends
hugh mellors
ordered 14/1/21 received 15/1/21 excellent service product perfect .
Romana
Very pleased with this charger, its the official Samsung one and fast charges my phone in no time. Communication through emails was excellent and delivery was within 48hrs. Good company and great product. Thankyou
Christine
Received a few days ago, seems the same as i got with galxy s6 and is working fine
Nadine
Searched everywhere for a fast charge UK samsung original charger for my galaxy note 4. Digitalsave seemed to be the only one's I found who had one and at a good price. Ordrered yesterday afternoon and received in the mornings post! Great service and the charger is working well. Many thanks.
Previous
1 2 3 4 5 6 7
Next
Write a review